Believe it or not, its a NEW TeamSwiderPeltz blog post! lol

It's been too long. And we are sorry about that. It's a hard balance to find when much of our free time between workouts is spent actively recovering to make sure we are prepared for the next workout or speaking for myself (Nancy Jr.), I find that I'm just too exhausted post workouts to have blogging on the forefront of my mind. But it is truly the best way to keep you all in the loop, which I know is the least we can do for all you who are our greatest support team.

That being said, here's an update :)

I am currently in the Calgary Airport waiting for my flight home to Chicago...just finished a 3-day weekend of racing at the CanAm competition and have 3 hours before our flight leaves and felt too guilty to not get back on this and post an update! haha

Our training group has grown a little. I still train with Jeffrey, Brian Hansen (who is making his comeback this year), Darren Huang (taiwanese speedskating training partner that has been with us for a bunch of years now), but now we have an awesome girl that has joined us: Petra Acker. Simply, I needed a girl training partner (the boys have gotten too fast for some training workouts) and she needed to be based more consistently at an indoor rink. So mom-coach reached out to her asking if she wanted to join our group...thankfully she said yes. It's been good to skate at a pace thats better for me so I don't fall into the overtraining I have done way too many times. And having Petra now, we push each other to our limits daily at a pace thats better tuned for our abilities. Lets just say its been a great fit! And she's a great encourager as well when I am having a hard day. 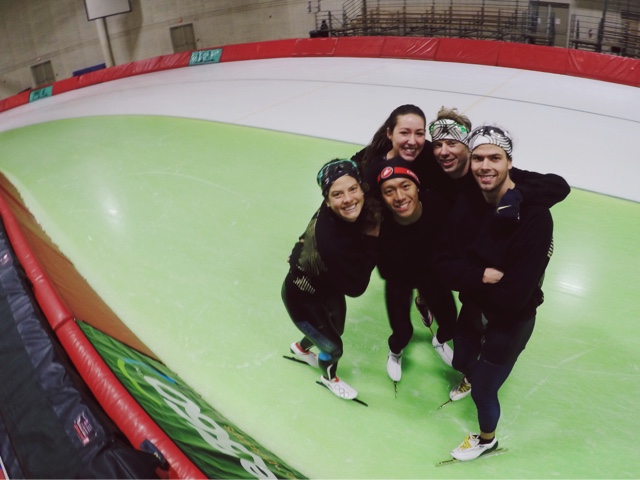 Our group didn't come together as a whole until the ice opened up in Milwaukee mid-August, so all summer Jeffrey and I trained together, and every one else was doing their thing. Tons of grueling inlining, weights, dryland skating imitation, stair intervals, etc. It was a solid summer. AND it was a solid first couple months of training on the ice before our first major competition in October for the Fall World Cup Qualifier in Milwaukee which some of you came to and SO thankful!!! From the first weeks on the ice, Petra and I trained weekly to push each other, skate faster, work through intense painful workouts, and became great friends. We had a Team Pursuit training camp with the National Team in Milwaukee mid-September that went well for all of us. But when it came to the Fall World Cup Qualifier, some of us struggled and were frustrated with results that didn't match the effort and work put in for so many months beforehand.

For myself, I was truly disappointed. And like I have been in the past on this blog, I will be honest and vulnerable, sharing a side of sport that is not usually seen because of the athlete drive to be the best and share a front that is strong, successful and all-good. But as much of you who know me know, I have struggled more than I have succeeded in speedskating. Yes I have made an Olympic team and that was my most proud moment of my athletic career, but I have failed in this sport more than I have had success. I hit rock bottom a lot. And yes, I have questioned my continuing in speedsakting more than once. To some, they may think I should be done and hang up my speedskates, but there is a fire still within me that says to keep persevering when my mind tells me I'm crazy. To continue on when I can't see the future, but He can. There is a certain truth, though, that out of some of the greatest hardships, the most disappointing moments, the times I am feeling ashamed at myself...come the greatest rewards (ask most champions). And those rewards are not just going to be in the obvious successes of winning, but will come in a form completely unexpected like influencing those people around you. And that is what continues to drive me in this sport that I have been so fortunate to keep pursuing and pouring my life into all these years: using the platform that I have been so fortunate to have and impact, encourage, and influence those around me and point them towards Christ.

Ok back to October. Again, the Fall Trials didn't go as most of us hoped, but Brian, Jeffrey, Petra, and Darren (who already qualified on his own) still made some of the Fall World Cups. Brian, Jeffrey, Darren and coach mom are currently in Astana, Kasakstan for their first world cup this season and will be competing THIS coming weekend...updates for those races/results will come later this week! And Petra and I are currently waiting for our flight home to Chicago after a pretty successful weekend competing here at an international race called the CanAms at the Calgary Olympic Oval (where mom-coach competed in her last Olympics in 1988!). Love this rink. It is one of the fastest in the world, rivaling the Salt Lake City Olympic oval. Petra dominated actually...setting a personal best (PB) in her 3000m, coming 4 tenths away from a PB in her 1500m and getting close in her 1000m and 500m. I, on the other hand, really struggled the first two days. My 1500m and 3000m were not close to what I am capable of, which brought me to a low point Saturday night. But I knew I couldn't dwell there, so with the help my my mom (who was flying to Astana at the time and on a layover in Frankfurt), Danny (my boyfriend), Petra and some friends, I stepped back trying to see the larger picture and brought my mind back to positivity. Sunday (yesterday) I was to race the 500 and 1000m and told myself I was going to have fun, setting aside my disappointments and getting pumped to sprint. My favorite race has always been the 1000m...and though I have not been training for these sprint races, I was going to mentally prep myself instead by setting goals and visually running through my races. The 3 goals I set I accomplished :) and raced times I haven't hit since 2013 SO...I ended on a great note and am leaving Calgary encouraged (because I still have the ability to skate fast laps! haha) and ready for the next weeks of hard training ahead leading into our US Nationals out in Salt Lake City come early January.

Hope that gives some brief insight on the TeamSwiderPeltz training life so far and wanting to encourage you that if you want to pray for us, we would love prayer support as we continue to train hard and prepare for important races as well as staying healthy and injury-free throughout the next year and a half. We thank you all so much for your support, love, and encouragement...I know I say that a lot, but I (and Jeffrey) can't emphasize it enough. We are able to do this, to pursue speedskating and live out dreams with the talent/abilities the Lord gave us because of YOU.

Posted by Unknown at 3:48 PM No comments: