London 2012 -a LONG recap of our experience 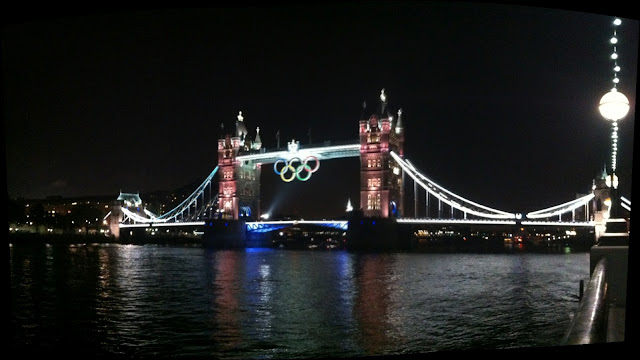 Leaving from Inzell, Germany on time and getting all 5 of us and our ridiculously large luggage to the airport and checked-in was a feat in itself, but we made it. After 4.5 weeks of hard training in Germany, our bodies were ready for some rest and the next 4 days were to serve as that recuperating time, clearing the mind of training while giving it stimulation from the Olympic spirit. As we walked outside to the airplane, it began to sink in, we were heading to see some London 2012 Olympics. Pumped to go support some TeamUSA and since the boarding line was long, we couldn't resist posing for a pic outside the plane (though poor Pim, the DUtch speedskater training with us for 6 weeks, was outnumbered being Dutch)...I'm sure we were of great entertainment to those passengers already on board!

That first afternoon was spent getting to know the amazing couple who opened up their home for us to stay in while we were in London. Shout out and cannot thank Dave & Lynn enough for their hospitality and generosity n letting us crash at their apartment for 4 days. After a wonderful home-cooked meal Lynn made, Jeffrey and I still explored London, even though we didn't see much, and familiarized ourselves with the transportation, the layout of the city and where the sponsor houses we were going to visit were located. Meanwhile, Brian and Pim were staying with relatives (of Brian) not too far from us, but communication and meeting up proved a huge challenge when we had to rely on direct twitter messages (Brian hadn't set up iMessage yet).

Day 2, Wednesday...the plan was to see some TT (time trial) Road Cycling. We weren't successful in meeting up with Brian and Pim, so Jeffrey and I headed out west in shoulder-to-shoulder-packed trains to watch some Olympic action. The crowds were decked-out (especially the Dutch, always faithful in their orange!) and amazing as they were fully involved in chants. Below is a clip from when Wiggins past us...the British sure love their Wiggins!

BUT I was particularly proud of my fellow Americans...for Kristen Armstrong, Gold was her color that day, owning that TT and defending her champion title from the 2008 Beijing Olympics. Taylor Phinney was also a stud, taking his second 4th of the London Olympics, and he is only 22. When America typically praises just the medalists, 4th place is hard to swallow, but coming from personal experience and taking 4th myself in Vancouver, it is such an honor of which to be proud. Medals are and will always be fleeting...what lasts is how you walk away from your accomplishments, using them to build character, integrity, and sharing that with those around you; faith & friendships/relationships are what lasts in this world today.


As soon as the time trials finished, we literally inched our way onto the overcrowded train back to downtown London. The Oakley Safehouse (now it is called 'safehouse' because it is a place where sponsored athletes, coaches, etc., are able to escape media and the craziness of the Olympics and chill for however long they want) was our next stop to see our amazing reps Steve Blick and Megan Pura-Porteous and catch-up, since we've not seen them personally for almost two years. But instead of just meeting these two, the entire staff at the Oakley Safehouse including the catering staff, were wonderful to get to know in the few hours we spent there. Their hospitality went above and beyond professionalism; you felt like you were best buds with everyone there. To be honest, I'd say that the Oakley Safehouse was the best sponsor house in London (a great article was written about it here). Superb service, food was to die-for and the friendships made will last. Jeffrey and I cannot thank y'all [Oakley] enough, we had a blast hanging out there and are already looking forward to your house in Sochi, Russia in 2014!


That night we took the train with Steve Blick and Kit Karzan (a stud cyclist himself and who also worked at the London Oakley safehouse) to the USA house with a small detour to a Lululemon party where we ran into the amazing Clara Hughes, a Canadian speedskater and friend, who returned to Olympic cycling after the Vancouver Olympics to make her third Summer Olympic team! Now for those of you unfamiliar with the term 'houses', basically at every Olympics, there are sponsors and country's Olympic committees who rent out buildings to set up as a place to eat, hang-out, celebrate, meet people/socialize, watch the Olympics, etc. Some require serious accreditation, some you just need a Visa (the Visa house!). The craziest of them all, I hear, is the Heineken house (shout out to the Dutch again, ha).

Once at the USA house, we met up with Kristen Armstrong, the Gold TT road cycling medalist form earlier that day, along with a ton of other fellow Olympians including Sarah , Emily and Taylor Hughes. It was also a joy giving Jeffrey a piece Olympic spirit, introducing him to other Olympians/staff I knew, but also it was fun observing as he went out and developed his own connections. The night flew by after about 4 hours of chatting/meetings amazing people; it was already into the wee hours of the morning and time for bed.

Days 3 & 4 were spent at the P&G house and again, the Oakley/USA houses. Like in Vancouver, P&G went above and beyond giving the Olympians and their families a place to relax and be pampered. From a complete salon and a 'mancave' to a kids-care; from live Olympic coverage and a BBQ/food service around the clock to a full-service laundry, you could easily loose track of time just hanging out in there all day.


But probably one of the best part of the trip was running into familiar faces and people from or connected to Wheaton...the world is surely small. On Thursday, Jennifer Luedtke, a Wheaton College graduate and friend, took the train into London and we met up at the Oakley house before sightseeing along the Thames River. Later, both Jeffrey and I ran into Dan (who was a former Wheaton Football player) & Trisha Price and their baby on the way, Sarah Burd (a former speedskater from Milwaukee who's parents live in Wheaton), and Guy East (brother played Wheaton College football, coached by my dad). Both Sarah and Guy were in London with Athletes in Action, serving the Lord by sharing their faith in Christ amongst other ministry...loved what they were doing! Read up on their mission and ministry here.

Looking back on this trip, what an honor it was to be amongst such a celebrated gathering of athletes; current London Olympians and past Olympians. For myself, I was just in awe that I was there enjoying the USA, P&G and Oakley houses without being a competing athlete and then feeling the energy that will help fuel me as I gear towards Sochi 2014!


More pictures from London are below...